Guest Blog Post: "In the end trust and emotional connection are most effectively created in the real world."

(We asked one of our guests at this week's debate, Policies or Personality: Can the internet change the way we think about voting?, to write up their thoughts on the evening, and Rosie very kindly stepped up to the plate - thank you, Rosie!)

There's another personality quiz doing the rounds on Facebook. Vote for Policies may demand more than average levels of effort from your ever-decreasing attention span before revealing your core political identity to yourself, but it may also be marginally more useful over the next 40 days than knowing which 00s rapper you are. Although I have walked taller since learning of my innate resemblance to Andre 3000.

As someone who studied Politics in order to decide which way to cast my precious vote, I'm the obvious advocate for a service which presents each party's policies in their original, unmediated language, unencumbered by spin. 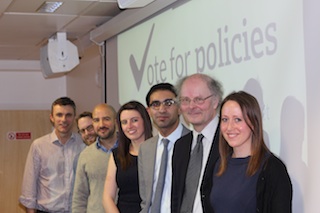 I'm also the obvious punter for a discussion on whether the internet can change voting by focussing attention on policies instead of personalities. The VfP team clearly see the opportunity their site creates to get people talking about the nature of British politics more broadly. Perhaps inevitably given the internet's ability to foster people power, the debate was as much about Direct versus Representative Democracy as the internet's role versus legacy platforms in supporting political communication.

The discussion worked because of the diversity of disciplines and perspectives on the stellar panel, but also because of the humility with which VfP operates. So often the tech community presents its impressive solutions as the 'game-changing' panacea, whereas they tend to work best in context and collaboration. It's refreshing to see a tech team willing to open up the debate around their tool.

Here are the discussion points I found most noteworthy in a gem-packed debate:

In the end trust and emotional connection are most effectively created in the real world. Vote for Policies is a fantastic tool in the voter's arsenal, particularly while that voter waits for someone - anyone - to turn up on their doorstep and try and win their vote.