Thank you to you all

Posted in News by Matt CM

What an amazing few months it has been. We've worked closely with so many brilliant people on the 2015 campaign and we want to thank you all for contributing and working so hard to help Vote for Policies reach so many people. We're looking forward to building on this - creating an even better service and reaching more people across the UK.

The amazing crowd-funders and backers, over 900 individuals, who believed in the project at the start of the Crowdfunder campaign and continue to support VfP to be a strong service.

The Joseph Rowntree Reform Trust, for their funding and support.

UVd, the team of web developers who built the 2015 Vote for Policies site and enabled it to be used by 6,000 people at the one time.

Simon Plenderleith, our partner and technical advisor, who helped to build the 2010 site and led a team of volunteers to develop the new Vote for Policies Data site this year.

All the volunteers who worked with us in different ways, from handing out business cards, sharing stories, encouraging young people to vote, volunteering at events, running a Reddit session, joining the team in the office to tweeting and plugging the site. Thank you!

Our Board of Advisors, for their support, advice, and ongoing work to boost Vote for Policies across the UK.

TNS BMRB, the social research company who carried at the national poll we designed on education and health policies.

Dare, the digital agency who worked with us on creative output and media coverage.

Farrer Kane, the PR agency who worked with us on media outreach, regionally and nationally.

Birkbeck Institute for Social Research, our research partner who hosted March's public debate Policies or Personality: Can the internet change the way we think about voting? with five speakers. In particular we want to thank Justin Schlosberg, Benjamin Worthy, Emran Mian, Laura Perry, Sunny Hundal, John Curtice and Rosie Campbell for working with us.

All the journalists and broadcasters who gave Vote for Policies coverage in the media and in the tech world over the last few months. In particular, Sharmini Selvarajah for her advice and media support. 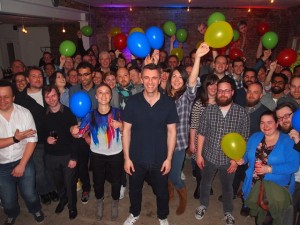 To Ed Saperia, Kevin McLaughlin and the rest of the team who provided the excellent East London venue for our election night party last night - and especially to Emran Mian and the brilliant Jake Yapp for making it so enjoyable.

And of course special thanks to all the political parties in England, Scotland, Wales and Northern Ireland for working with us in getting their policies on our site.

Thank you all for your support. Here's to the future.